Skip to main content
It looks like you're using Internet Explorer 11 or older. This website works best with modern browsers such as the latest versions of Chrome, Firefox, Safari, and Edge. If you continue with this browser, you may see unexpected results.

Using Primary Sources: Do we have any primary sources?

This LibGuide is designed to provide students with a basic introduction to primary sources and to give them some places to begin locating primary source documents.

Primary Sources In Our Library

There are quite a few books in our library which offer access to primary sources.  To find sources that will enahnce your research, use the keyword search in Destiny to search for "your topic" and "primary source*."

Examples In Our Library Include:

Primary Sources in our library:

Other places to find primary sources:

The University of Idaho maintains the Repositories of Primary Sources website.  This is a compilation of websites, organized by country, which archive primary source material.

Making of America is a database maintained by the University of Michigan and Cornell University.  The primary source documents it contains reference the United States from Antebellum times through Reconstruction.

History Matters' database, "Many Pasts," contains over 1000 primary sources documenting the lives of "ordinary Americans" beginning as early as the 1530s. 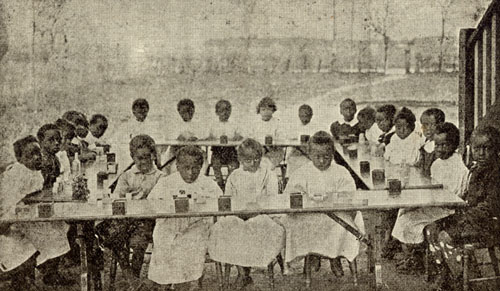 A photograph of a kindergarten class, from a book entitled Evidences of Progress Among Colored People, published in 1902 and archived in University of North Carolina's digital collection.

In addition many states, smaller universities, and museums maintain topic-specific archives of primary sources.  Some examples include the Digital Library of Georgia, the Massachusetts Historical Society's "Thomas Jefferson Papers," and the University of North Carolina's digital collection which focuses on the history of North Carolina and the American South.