Find information for your paper and create your video using this helpful guide.

Key Arguments for the Defense
This group should focus on the main arguments put forth by the defense in this case.

Famous Trials in American History: Tennessee vs. John Scopes
Law professor Douglas Linder from the University of Missouri, Kansas City, created this exceptional legal history site. It includes fascinating treatments of over 50 of the most prominent court trials in American history, including the Scopes “Monkey” Trial (1925).

Clash of Cultures in the 1910s and 1920s
An interpretive essay of more than 10,000 words on the culture wars of an earlier day, with approximately 34 documents and 75 images (photographs, cartoons, posters, flyers, and maps), this site, prepared by two Ph.D. history students, contains a section on the Scopes Trial.

H. L. Mencken's Writing on the Scopes Trial
Mencken, a vocal critic of the prosecution, reports on the trial in these articles.

Teaching and Learning About Evolution with the New York Times

Search these databases available through AVL.

History Reference Center
A search for "scopes trial" or the individual names of the major players returns a number of results. Click on the article of interest and on the left-hand side you will see your full text options. You can also find information by searching for subjects "EVOLUTION -- Religious aspects" or "SCOPES, John Thomas -- Trials, litigation, etc.". 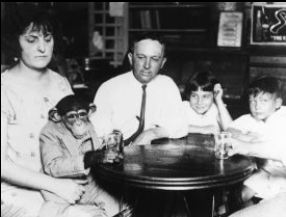 Joe Mindy, one of several chimpanzees who appeared in Dayton during the trial. Dressed in a houndstooth sportcoat, tie, spats, and felt hat and carrying a walking stick, the young male chimp performed in circuses. Joe's owner brought him to Dayton from Atlanta, with intention of presenting him as an exhibit for the defense as living proof of evolution. The defense declined the offer, but Joe was a big hit on the streets during his several-day stay in Dayton. (Photo by Underwood and Underwood; courtesy of the Tennessee State Library and Archives.)