Igniting The Holocaust - Facing History and Ourselves: Rebuilding a Country: Society in the Weimar Republic

"Every outrage against humanity..."

After WWI, British Prime Minister Winston Churchill spoke about the terrible things that had been done in the name of war:  "Neither peoples nor rulers drew the line at any deed which they thought could help them win. Germany, having let Hell loose, kept well in the van of terror; but she was followed step by step by the desperate and ultimately avenging nations she had assailed. Every outrage against humanity or international law was repaid by reprisals-often of a greater scale and of longer duration."

Reflect -- In your journal, respond to this quote by answering the following questions:

In Germany, 11 million soldiers went to war; more than 7 million of them either came home injured or did not come home at all.

After the war, German society was shaped by the memories of the war and by the young men who had been hurt or lost.  Artwork from the time just after the war gives us some insight into how the German people were feeling.

Another artist, George Grosz, painted The White General (below) in 1919.  Grosz served in the German army during WWI.  His experiences there caused him to be hospitalized in an institution for the shell-shocked and insane.

"'I was disappointed,' he wrote, 'not because the war was lost, but because the people had tolerated it and suffered it for so long a time, refusing to follow the few voices that were raised against the mass slaughter.'"  - From Ralph E. Shikes, The Indignant Eye: The Artist as Social Critic in Prints and Drawings from the Fifteenth Century to Picasso (Boston: Beacon Press, 1969), 288, as quoted by Facing History. 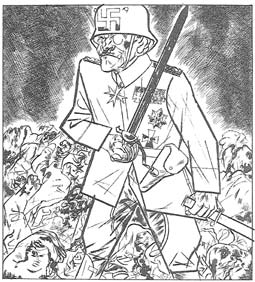 Reflect -- In your journal, respond to these images by answering the following questions: